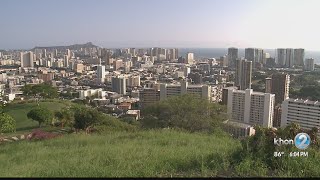 Check me out on the news commenting on the Oahu real estate market:

HONOLULU (KHON2) - For the first time in years, Hawaii’s housing market is beginning to level out.

April showed the median single-family home decrease to about $760,000 on Oahu, which is cheaper than six months ago when prices were above $800,000.

"We're seeing a shift in the market from favoring sellers to slightly favor the buyers,” said Matthew Wong, realtor associate for iNet. “We're also seeing the property prices plateau out so you're seeing the interest rates come down as well. It's great to be a home buyer because now you can qualify for that home."

Newly released census data showed more than 60,000 people left Oahu for the mainland over the past eight years—bringing Honolulu’s population below one million.

And with more condominiums being built, there's more inventory.

But being able to afford the median price still seems out of reach for most of Hawaii’s population, especially for first time home buyers.

"Places like Hawaii, it's a lot more expensive, but when you're thinking about buying your home just think it's not your first home—your dream home is going to be coming a few houses down the road,” Wong said.

Realtors suggest millennials and first-time buyers look into condos which today are around $400,000.

“If you're still renting that might be the best option for you, but you're not gaining any equity so get that condo, start building equity, use that equity to pay your down payment for the next home and keep doing that until you get into your dream home,” Wong said.

So where should residents be looking?

"The greatest affordability is going to be from Makaha to the Ewa Plain because there's a lot of new construction inventory as well as re-sale there,” Leonardi said.

But what would happen to Oahu’s market if vacation rentals were banned from residential neighborhoods like the bill in Honolulu city council?

"We had a client that called us in a panic, she owned three vacation rentals and she was in a panic and ready to sell them all and leave the island because that's how she's been earning her income,” said Adrienne Lally, Team Lally, Keller Williams Honolulu. “I think it could cause a flood of homes to come on the market."